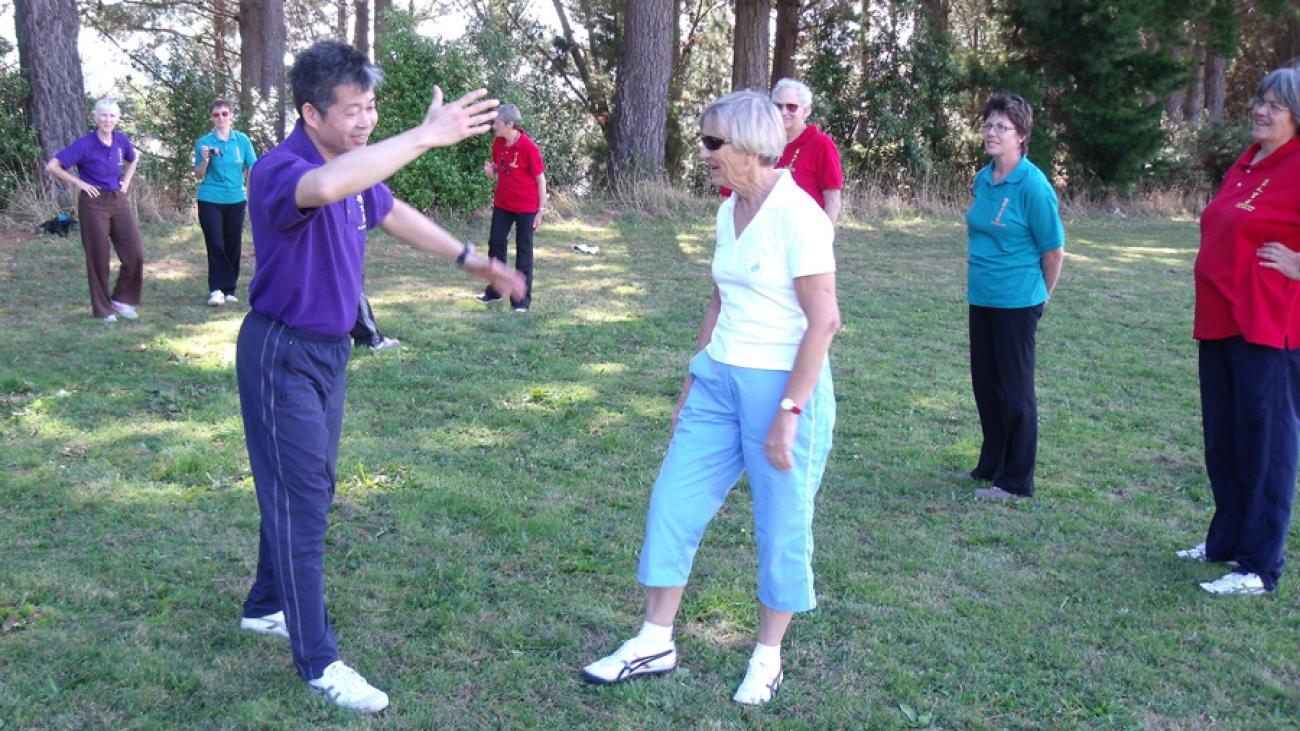 Qigong?  What’s that? Oh its sort of Tai Chi is it?  How often do I hear this sort of question!!  Where Tai Chi (Taiji Quan) is pretty well known in the West, many people have never heard of Qigong – let alone Wild Goose Qigong.  So here goes for an introductory explanation.

I often start this explanation by saying that ‘Qigong’ is a general concept a bit like ‘exercise’.  The western idea of exercise is based on physical movement – and there are many many different kinds and traditions of physical exercise, including sports.  In contrast, Qigong is based on the concept of ‘qi’ or internal energy that can be ‘worked with’ (gong) in skilful ways to strengthen internal organs, and promote a free flow of qi throughout the channels and acupuncture points of the body, increasing energy, stamina and a healthy immune system.

Qigong is integral to Chinese thinking and tradition about health and connects to Traditional Chinese Medicine,  5 Element Theory, the concept of Yin and Yang or balance in all things.  As such, it also permeates theory and practice of Chinese Martial Arts, including Taiji Quan (Tai Chi).

So here ,where Qigong and Taiji Quan overlap, is also where they diverge. Whereas Taiji Quan is a martial art i.e. developed for purposes of fighting and defence,  Qigong is about internal health and strength – i.e. primarily is about health.

Furthermore, just as there are many different kinds of martial arts, including several different traditions of Taiji Quan, so there are different traditions of Qigong.  The Qigong we teach is of course the Daoist Dayan (Wild Goose) Qigong with its beautiful flowing movements that follow nature in the style of the movements of the Wild Goose as observed by the monks high up in the Kunlun mountain range hundreds of years ago.  Stretching, fluttering, gathering and releasing qi, movements that help qi move through the channels, connect to acupuncture points, fast and slow, moving to build energy and stillness to store energy – Dayan Qigong can heal, prevent ill health and promote optimal good health.

Of course, Taiji Quan is also good for health and usually this is how it is promoted.  But the movements were developed as training for combat, drawing on internal energies as well as specific movements for attack and defence.   Chen Taiji Quan is taught at the Tse Qigong Centre and is the ‘mother ship’ of later traditions such as Yang, Wu, Wu and Sun.  In addition to Dayan Qigong, I also enjoy training in Chen Taiji Quan, as well as the skills of Northern Shaolin ‘Chun Yuen Quan’.  All these different energies train the body and mind in different ways, all are enriching. 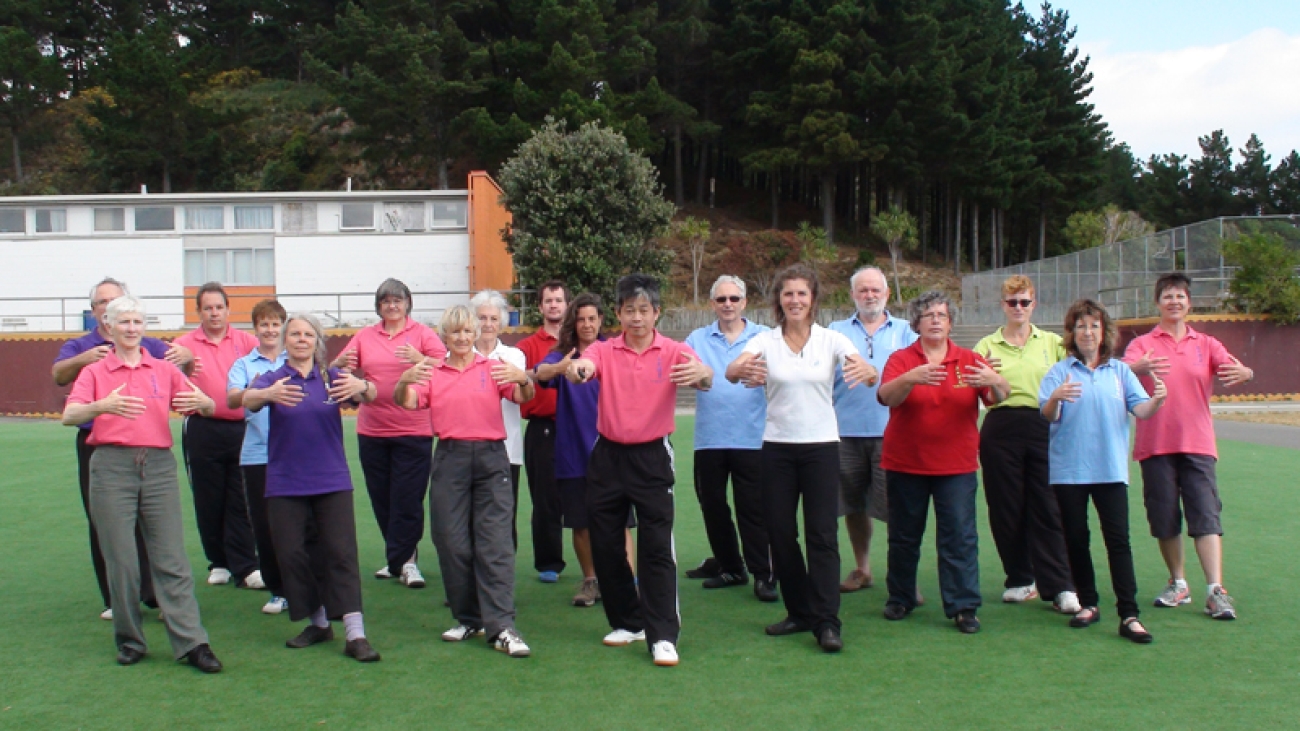 Gradually Wellingtonians are heading back from the beaches, lakes, mountains and other summer retreats.  Though this year summer blazed away in Wellington for those who remained behind.  Hopefully all students were able to enjoy some relaxing qigong practice somewhere in the warm, fresh outdoor air.

Classes resume:  In Karori classes begin on Tuesday 26th January at the Karori Recreation Centre.  Chun Yuen at 10.45 and Qigong at 11.15.

Seminars with Master Tse: Once again, Master Tse travels the long journey to New Zealand and Australia to refresh our leaning and teach us some new skills and forms.  You can read details on the seminar page of this website plus I sent current students all the information and registration forms last year.  The introduction to Hard Qigong is new for students in New Zealand and I would definitely encourage you to sign up for this seminar.  You’ll be amazed at how you feel at the end of the session!

Master Tse has a deep, profound knowledge of a range of traditional Chinese skills and he is committed to passing this knowledge on to benefit as many people as he can.  His teaching is wonderfully clear and deceptively light hearted.  We are lucky indeed he comes this far to share new knowledge and polish our forms.

Australia:  Go to wildgooseqigong.net to see what seminars are being taught in Brisbane the last week in February.  Students and instructors from there will also be joining us in New Zealand the following week.

New students can join in classes at any time but now is a good time to start.  Contact me on 021 613 081 for information.  Private lessons are also available for starting and continuing students who want more intensive tuition – perhaps to catch up after time away – or just to polish a form in depth.

Whatever and wherever – happy, healthy new year to you all!! 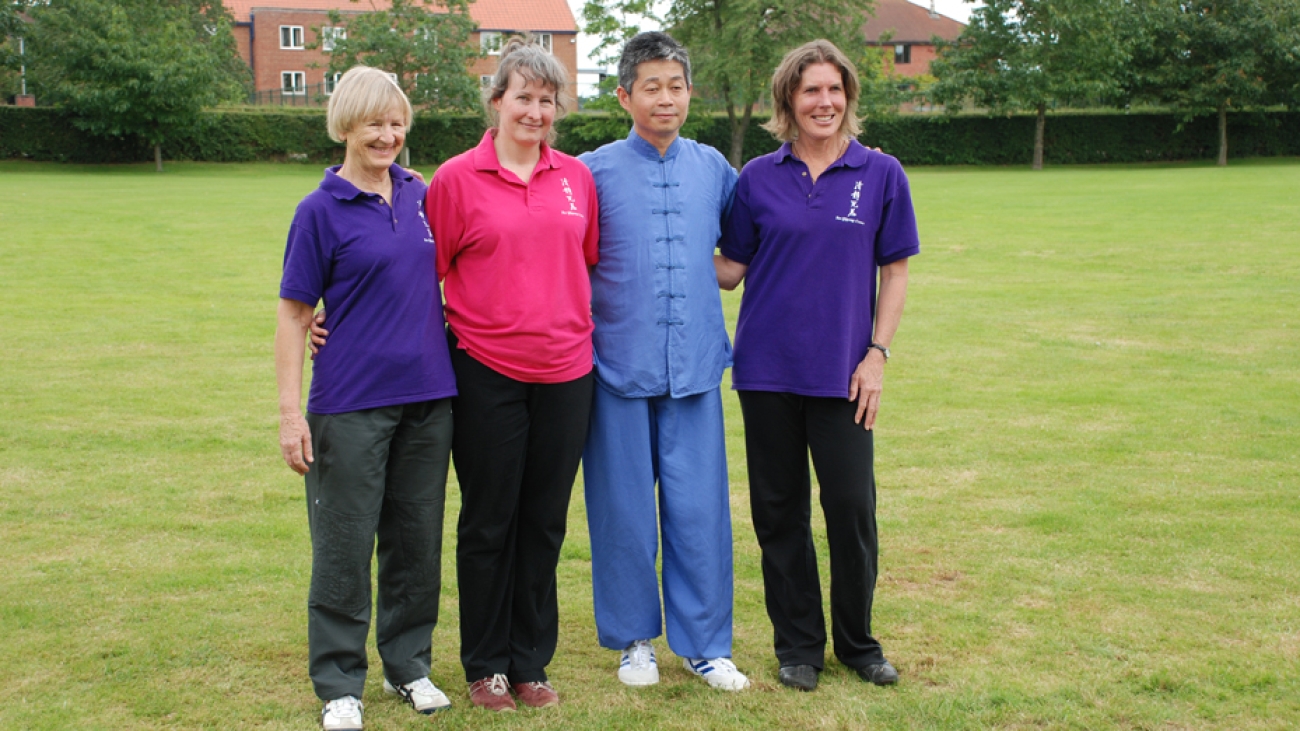 Welcome to the new website for New Zealand Wild Goose Qigong: Wellington.    This website features strong images of Master Tse Wei Jing (Michael), the founder of the Tse Qigong Centre (UK) by whom I am authorised to teach the skills of Dayan Qigong and Chun Yuen Quan.  This lineage of authentic instruction goes back to Master Tse’s teachers in China, such as Yang Meijun and many many generations before her.  I am Master Tse’s grand student through my Sifu, Jessica Tse and now some of my students have also begun their journey to become authorised instructors. This ensures the skills will continue to be passed down to future generations here in Wellington.

For current students and others seeking to find out more, this website provides you with information about the skills and their philosophical origins that are taught here in the Wellington classes, and how the classes and syllabii are structured for learners.  We welcome adult learners of all ages and any level of fitness.  Evening and day classes and private lessons are all available.  In addition you will see information about up coming seminars taught by Master Tse who will make his annual visit to Australia and New Zealand late February – early March.   Through this blog, I will keep you informed about classes, events and general information about the skills and related philosophies.

You can also follow the link to the Tse Qigong Centre website (www.tseqigongcentre.com) and to Master Tse’s weekly Dao published on his London Qigong website (www.londonqigong.net) .

I am extremely grateful to Tse Qigong Centre Senior Instructor, Siba Darryl Moy of Manchester, who has created this website for your use.  His deep knowledge of the skills and philosophies taught by the Centre have ensured the website is ‘fit for purpose’.  Thank you Darryl!

I look forward to receiving any feedback or comments and of course, look forward to enquiries from prospective students.  You will enter a world as interesting as it is health giving – a world I am daily grateful to be part of. 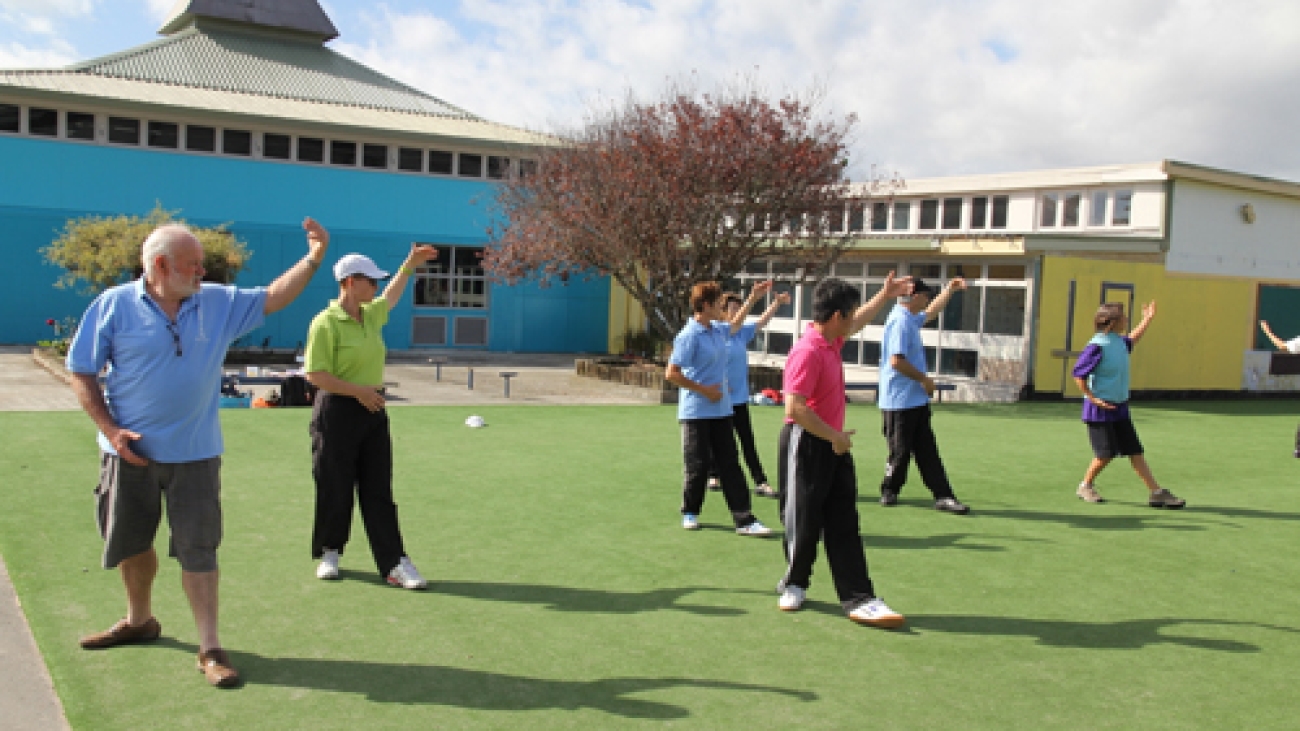 Wild Goose Dayan Qigong & Shaolin Fist  in Welington every Tuesday evening. New students are welcome at all times and all students, whatever their experience, train together. There is a wide range of students from different backgrounds, cultures and ages. Some have only just begun their studies of Wild Goose – Dayan Qigong and Shaolin Fist – Chun Yuen Quan and others have been studying for a many years. This wide mix creates a vey friendly, open and sociable atmosphere.

You are welcome to come and watch the class, however we encourage you to join in as this is the only way to get a real feel. There is no formal uniform, though there is a club polo shirt which you receive once you become a member and so t-shirt, jogging pants and trainers are normal attire. Study Wild Goose Dayan Qigong & Shaolin Fist in Wellington and improve your health, coordination and energy! 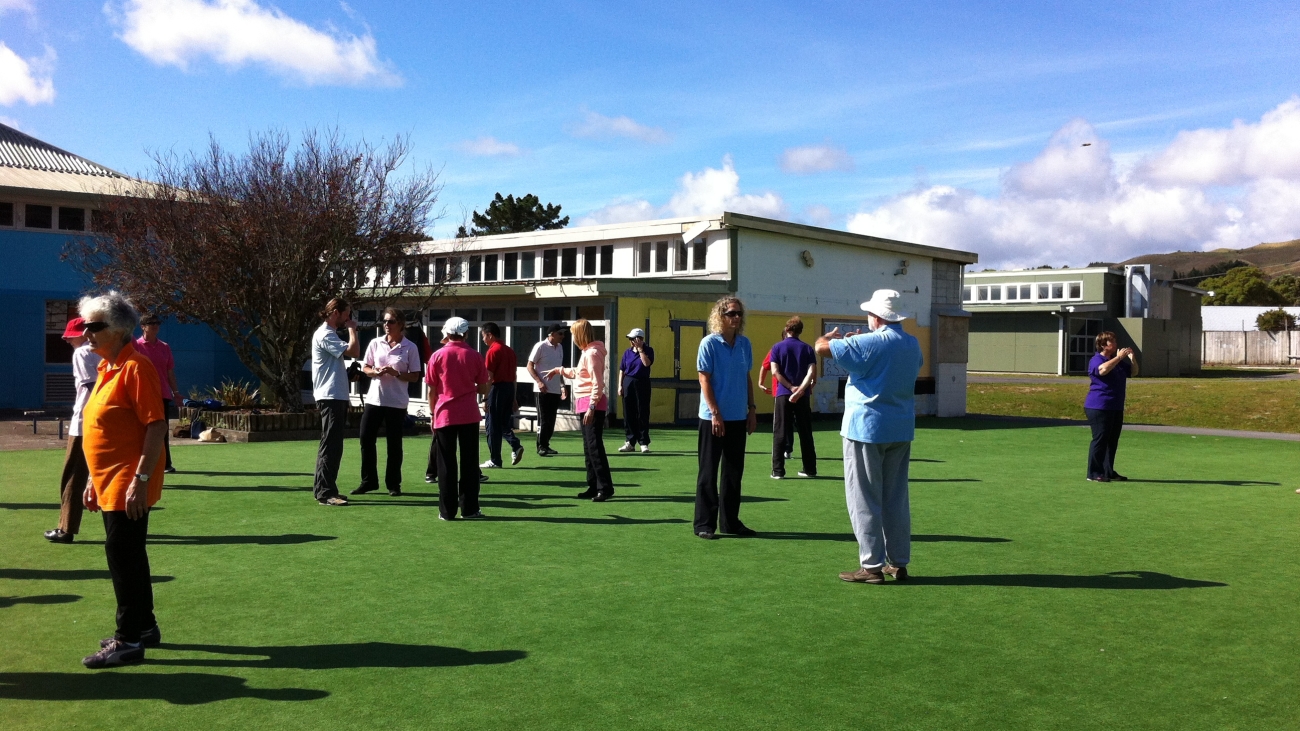 Wild Goose Dayan Qigong & Shaolin Fist  in Karori every Tuesday morning. New students are welcome at all times and all students, whatever their experience, train together. There is a wide range of students from different backgrounds, cultures and ages. Some have only just begun their studies of Wild Goose – Dayan Qigong and Shaolin Fist – Chun Yuen Quan and others have been studying for a many years. This wide mix creates a vey friendly, open and sociable atmosphere.

You are welcome to come and watch the class, however we encourage you to join in as this is the only way to get a real feel. There is no formal uniform, though there is a club polo shirt which you receive once you become a member and so t-shirt, jogging pants and trainers are normal attire. Study Wild Goose Dayan Qigong & Shaolin Fist in Karori and improve your health, coordination and energy! 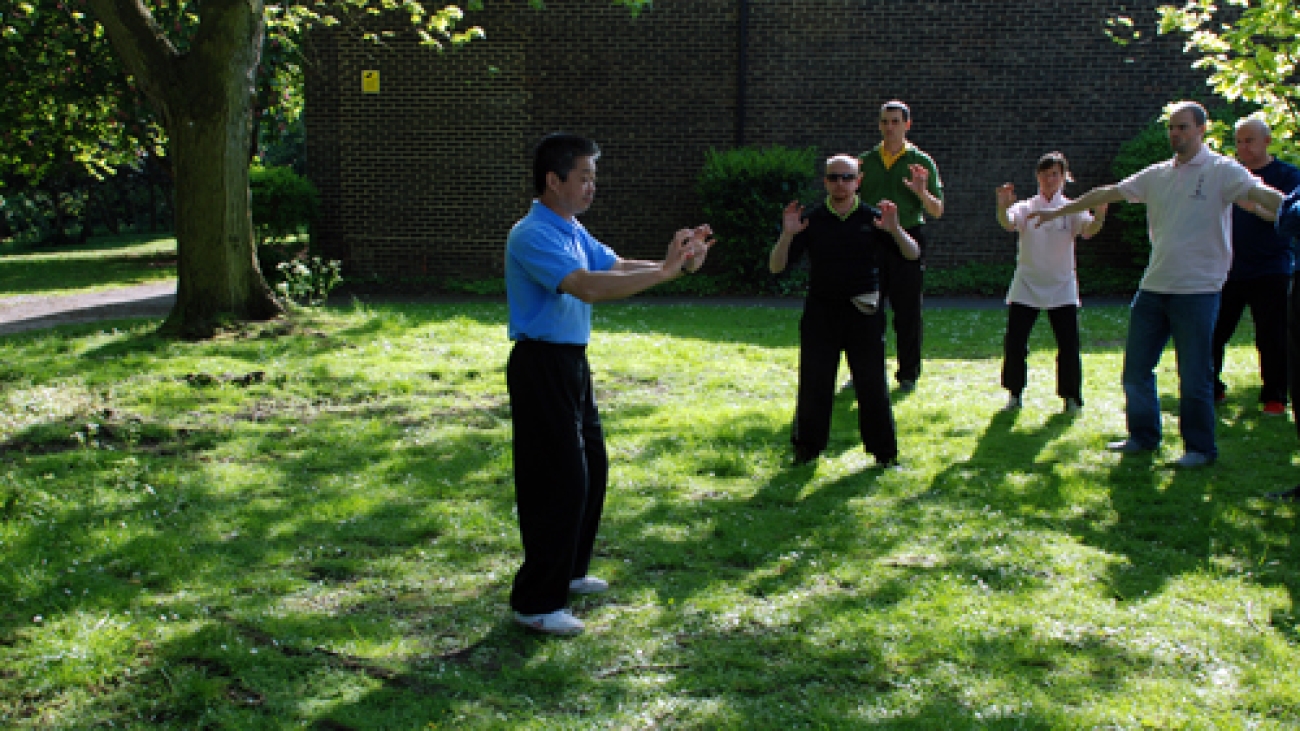 Hard Qigong works to develop the body and internal organs to a super degree of health and condition by using special breathing techniques that are unique to this type of skill. It will help to strengthen the bones and marrow and bring up very strong Qi in the body. Level I is very good for anyone suffering from weak Qi, poor circulation, low energy and weak bones and tendons. 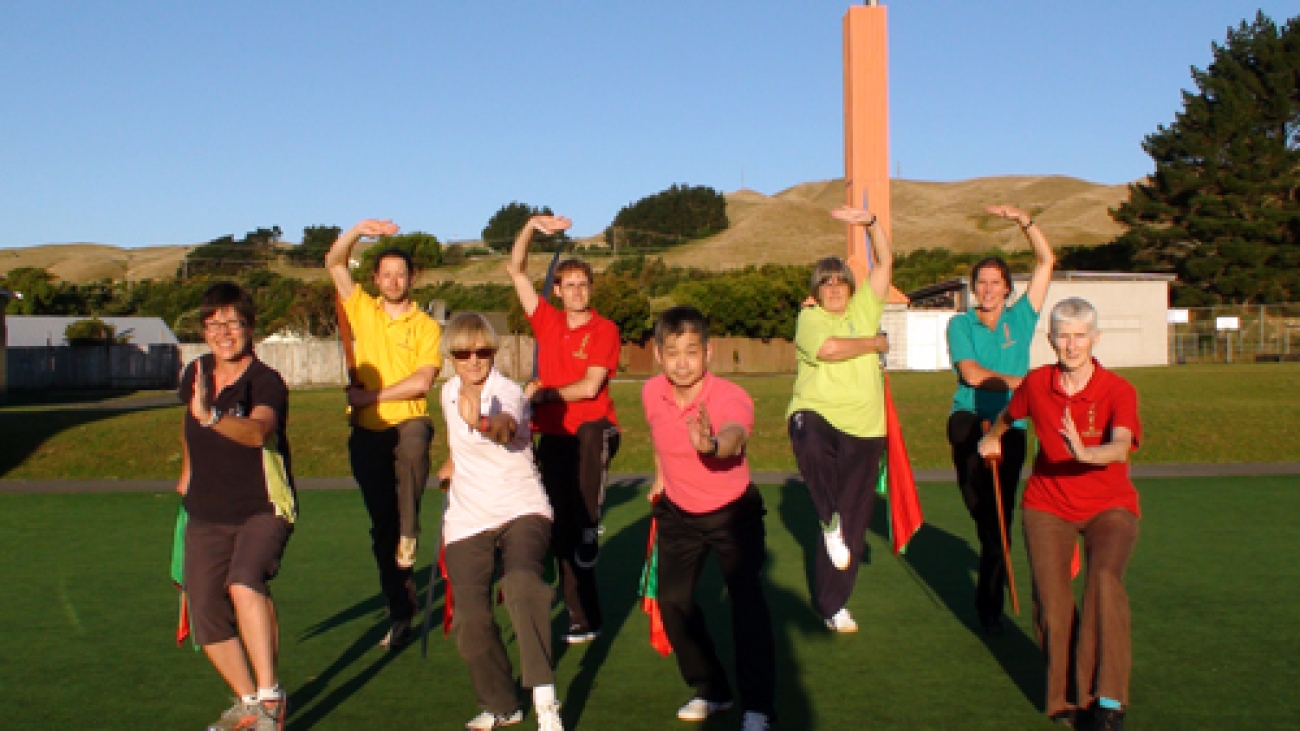 The fuill name of this form is Five Tiger Breaks the Gate Knife and it uses a very long cloth as a colourful and noisy distraction against an opponent, helping to camouflage the knife blade. Although you may have never thought of yourself as practising weapons, they actually will train the body in a different way than barehanded forms do. Master Wu Chun Yuen still practised this form in his seventies and so we know that it is a skill for all ages. Regular practice of the form will make the body light, flexible and the mind agile as it develops coordination internally and externally.